Tank Inspection Regulations for the State of Maine

Aboveground Oil Storage Tank Program staff are responsible for administering the technical aspects of the Department’s:

The term "SPCC Plan," as used in federal regulations under the Clean Water Act, stands for "Spill Prevention Control and Countermeasure Plan." An Oil SPCC plan is a plan prepared in accordance with good engineering practices to prevent and clean up spills from oil storage tanks. "Oi" as defined in the federal regulations includes petroleum oils such as gasoline, diesel and heating oil as well as non-petroleum oils such as animal or vegetable oils, synthetic oils, and mineral oils.

The federal SPCC plan requirements apply specifically to oil storage facilities with an aggregate storage capacity greater than 1,320 gallons and where a discharge could reach a navigable water body, either directly or indirectly. Any oil storage container or tank that is 55 gallons or larger in size counts towards the total aggregate storage capacity. Most areas in Maine are considered locations where a discharge could reach navigable waters.

In 2002, the Maine Legislature enacted 38 MRSA § 570-K(5), giving the Maine DEP authority to oversee compliance with the federal SPCC requirements for aboveground storage facilities that exceed the federal 1,320 gallon aggregate storage capacity threshold and are used to market and distribute oil.

An SPCC plan lists the containment equipment and structures used to prevent spills from reaching ground water or surface water, and it identifies the inspection, monitoring and oil transfer procedures that will be followed to prevent a spill. If a spill occurs, a well-developed Oil SPCC plan will identify whom to call, and will specify steps, or "countermeasures," to contain the spill and minimize environmental impacts. The specific SPCC requirements for oil storage facilities are found in federal regulation, 40 CFR Part 112. A qualified professional engineer must examine the plan and attest that it has been prepared in accordance with good engineering practices.

After July 1, 1995, it became illegal for an owner to operate aboveground tanks with underground piping not constructed of a non corrosive material approved by the DEP.

Effective August 23, 2006, the Maine Legislature adopted a new law that established new requirements for facilities with aboveground tanks storing motor fuel (gasoline, diesel, biodiesel, aviation gasoline, jet fuel, gasohol or other fuels used in the operation of a vehicle or motor engine) and that are connected to underground piping.

This new law established several important deadlines for owners of aboveground motor fuel facilities to be aware of:

An owner of an aboveground oil storage tank with underground piping is subject to the requirements of this subsection.

Please contact us to schedule your chemical tank inspection.

Our team is here to help you with all your chemical and industrial tank needs. 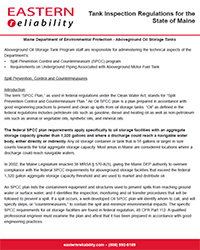 Fill out our form below and we will contact you shortly to schedule a date for your chemical tank inspection.